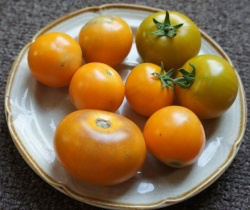 Indeterminate, regular leaf, 1 1/2 inch cherries. Slightly larger than Sungold F1, the color was more red/orange than Sungold F1. The taste was not as sweet but still very good. Production was also a bit less. All in all, not bad. Early/mid season, 70 days.

This is a fairly nice variety. Production is good. It seemed fairly reliable once it started to produce. Mine didn't produce all season (but most of it). It was earlier than most, but probably not early. I liked the taste and shape quite a bit. I ate the first one with cheese (so that's probably why the flavor reminds me of cheese now). They were a goldish orange and were large cherries. The shape was kind of blocky (at least at first; I think perhaps they eventually became round). Mine weren't acidic. They were kind of sweet (but probably not as sweet as Sungold F1; definitely not as sweet as Ron's Carbon Copy or Medovaya Kaplya). I gave a friend of mine (not in the same area) some seeds from the same packet, and she said she got both red and orange fruits. She vastly preferred the taste of the red ones (but she did enjoy the orange ones); her red fruits were also sort of blocky. My fruits were not prone to cracking; they were firm and opaque (you couldn't see the veins through the skin).