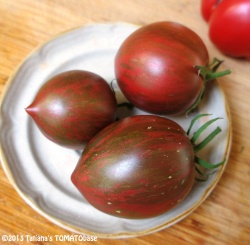 Indet., regular leaf plants with wispy looking foliage. Very beautiful fruits, dark purple/black with silver/gray/green stripes, oval-shaped, with a nipple at the blossom end. 3-7 oz. Delicious sweet flavor. It should be fairly stable in its F6 generation, we have not observed any segregations in 2014. (15 seeds / packet)

Retrieved from "http://tatianastomatobase.com/w/index.php?title=Pearls_of_Wisdom&oldid=117890"
Categories:
Facts about Pearls of WisdomRDF feed