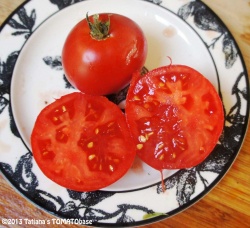 Indet., regular leaf plants. For some reason, plants suffered and did not produce well in 2013, despite the best tomato weather we had since 2009. We have picked just a handful of small red fruits, most were completely seedless, so only a few seeds collected. Need to regrow it again from the saved seeds to re-evaluate. Flavor is very good, full, and sweet. 4-6 oz.