Ahead Of The Game 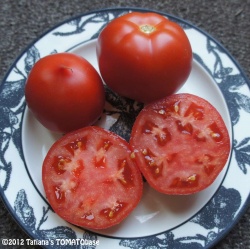 Indet. plants with regular foliage, early and prolific fruit set, red round oblate fruits, very good balanced flavor. 3-5 oz. It matured way before Malinovyi Gigant, which could have been its possible parent, and it was one of the first larger tomatoes to mature in 2012, after Sibirjak. It set fruit in cool and very wet weather we had from May to mid-July, when many other varieties simply refused to set.

Retrieved from "http://tatianastomatobase.com/w/index.php?title=Ahead_Of_The_Game&oldid=113365"
Categories:
Facts about Ahead Of The GameRDF feed