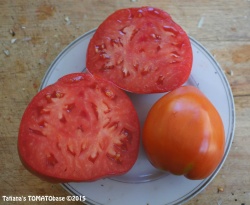 "75-80 DAYS - INDET. Wispy Regular leaf plant, usually one to two pound red fruit in bunches, often but not always heart-shaped; productive, meaty and very good taste. I believe these are what my uncle, John Oleyar of PA, referred to as "German" tomatoes way back in the 1960's when I was a kid and spent summers at my mother's homestead in PA where John lived and died. He had a friendly competition with his neighbor on the other side of the gravity railroad (Mr. Mike to me) for the first ripe tomato, largest tomato, etc. My job was carrying the coal ash out back where he grew the tomatoes. I can still picture John, his beer belly, crew cut and a huge smile on his face when I asked why his tomatoes were always bigger than Mr. Mike's. That was the first time I've ever seen a black bell pepper too--from Mr. Mike's place down the hill.

My mother (John's sister) believed she's of some form of "Slavic" decent though I don't know if that means Slovakia, Slovenia, Czechoslovakia, Yugoslavia, etc. I believe she is the only member alive from that side of the family and remembers little at age 80 and health deteriorating. John was a WWII vet; he never married and died in the 1980's. John's father was born in 1888 I believe. This may be a family heirloom passed down through multiple generations. I've only grown it once since his death to replenish seeds and seeds may not be the freshest."