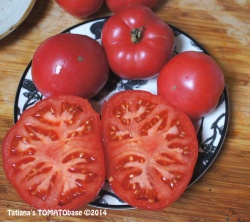 A.k.a. Livingston's Magnus. Large vines need caging or staking. Good production of medium (6-8 oz) globes or slightly flattened globes that are dark pink in color, sometimes with brownish shoulders, very good flavor. Unlike many old varieties these don't show any cracking except in the very wettest weather.


You can buy Magnus seeds at Tatiana's TOMATObase Seed Shop.