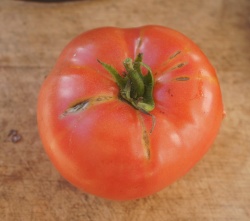 The name means "Pureles' Giant" in Russian, where "Pureles" may be the last name of the breeder.