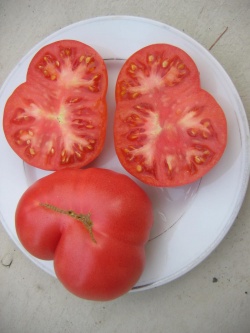 indet., potato leaf, first fruits are often fused and sometimes ribbed, quite early for such a large tomato, produced the first ripe fruit in the main garden in 2009. Fruits are pink and of variable size, but mostly medium, around 6-8 oz, with some fruits up to 13 oz. Very good to excellent taste for an early tomato, very nice texture.