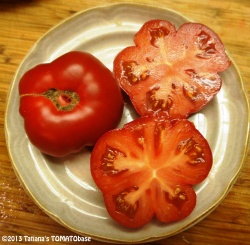 I received the seed from College of Rockies, BC, Canada, who is a keeper of Val and Dan McMurray's seed collection. Indet. plants with lacy regular leaf foliage with some curling. Prolific bloomer. Fruits are red, flattened and fluted, very beautiful, 2-4 oz. Assertive delicious flavor, more acidic than sweet. It is best to let fruits get fully ripe on the counter for the best rich flavor. (limited, 15 seeds / packet)