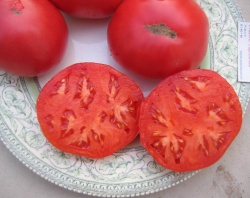 indet., regular leaf, it was surprisingly relatively early for me in 2009. Plants produce many large oblate beefsteaks with some green shoulders that fully disappear later in a season, small core, nice meaty texture, outstanding sweet flavor. One of my favorite tomatoes in 2009.